Thank God that there are people who help other people selflessly, like this team of doctors! My friends Inga Schilling and Werner Krauss had the good fortune to accompany this team and will report about it here. 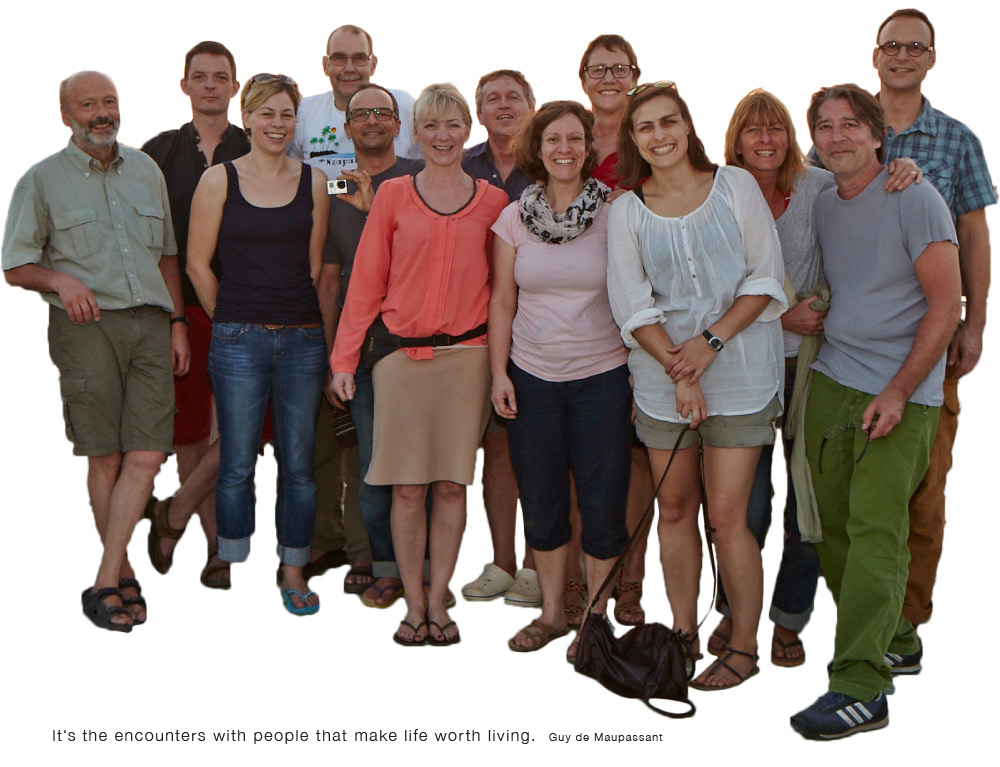 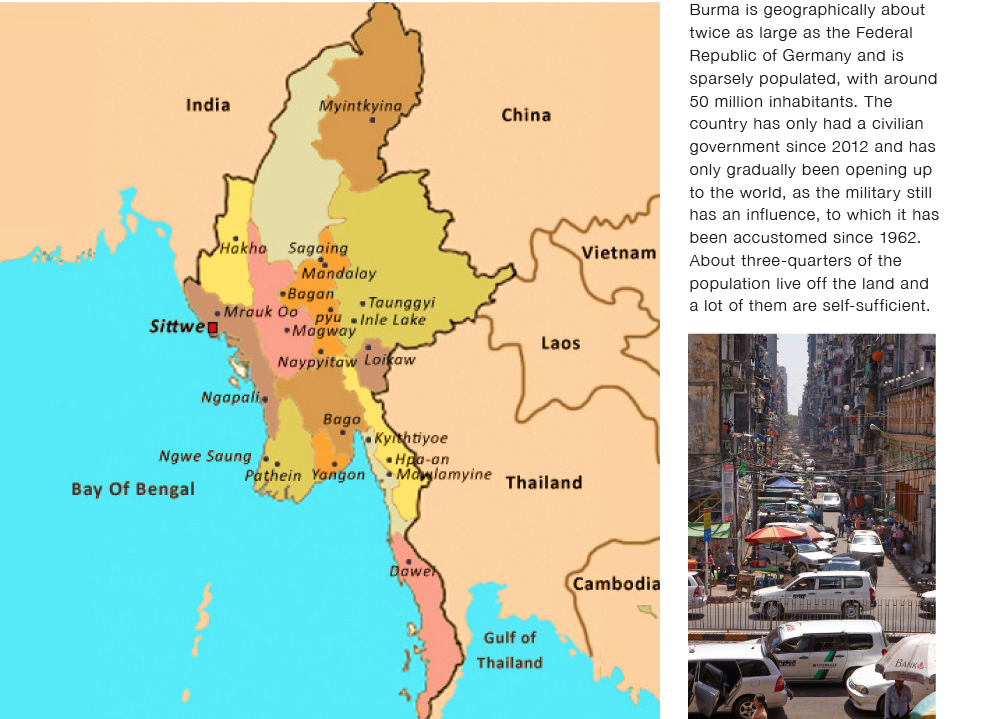 The health system is in a below-average condition. Government health institutions work with equipment which barely functions. There is a general lack of medical materials and medicines. Rural areas, or those which are difficult to access areas are barely supplied by the health system. The average life expectancy is around 61 years and the infant mortality rate is around 5 percent (around 0.35% in Germany). Theoretically, a doctor in Myanmar has “to look after” around 3000 inhabitants, while in Germany – as a comparison – there is on average one doctor per 226 people. The climate in the Rakhine State, to which Sitte belongs, is one of the unhealthiest in the world.

Although currently around 1 million tourists visit the country, it was a very special trip for us with our background knowledge of the above facts and figures.

Interplast e.V., Munich department (www.interplast-muenchen.de) is a charitable organization which, for the past 35 years, has been helping patients – mostly children and young people – all over the world to live a ‘normal’ life through free operations.

We – Werner Krauss, a photographer from Nuremberg and Inga Schilling, owner of a children’s modelling agency in Nuremberg – were allowed to join the Interplast team, which is on this occasion working on an operation in Burma, now Myanmar.

The team consists of 3 plastic surgeons, 3 anesthetists, 1 anesthesia assistants, 2 nurses and a student. The doctors have already been preparing for this operation for months. All medical equipment, bandages, medicines etc., which are required for this operation, have been financed by charitable donations. Altogether, the luggage weighed 440 kg und was spread over 20 crates and boxes.

Our journey began in late February in Nuremberg, via Frankfurt and Bangkok, and from Yangon we finally proceeded to Sittwe, where we arrived after 38 hours feeling tired and above all quite hungry. From the airport, however, we immediately continued on to our final destination, the monastery in Sittwe.

Even on this short stretch of the journey we were able to gather contrasting impressions: on the one hand, the beautiful countryside with its golden pagodas, which are already visible from afar. On the other hand, the boundless poverty of the people and their more than simple living conditions. There are no proper streets or houses. People sit on the floor everywhere and prepare their meals there in the dust. They live in primitive wooden huts. 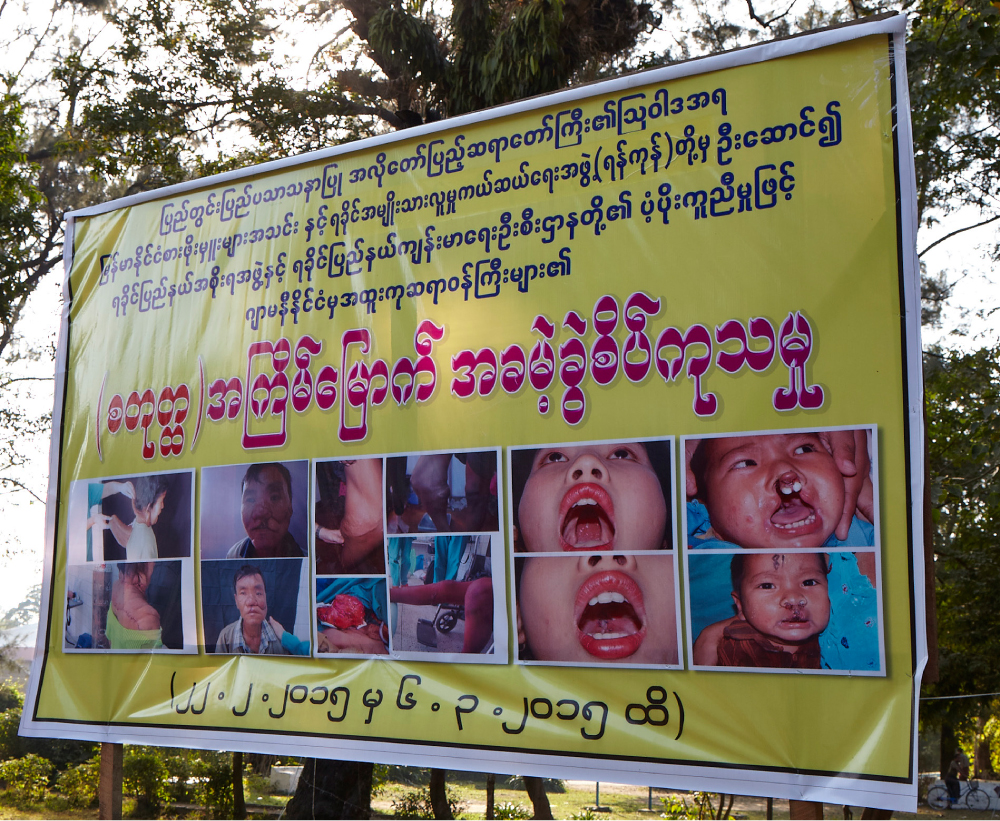 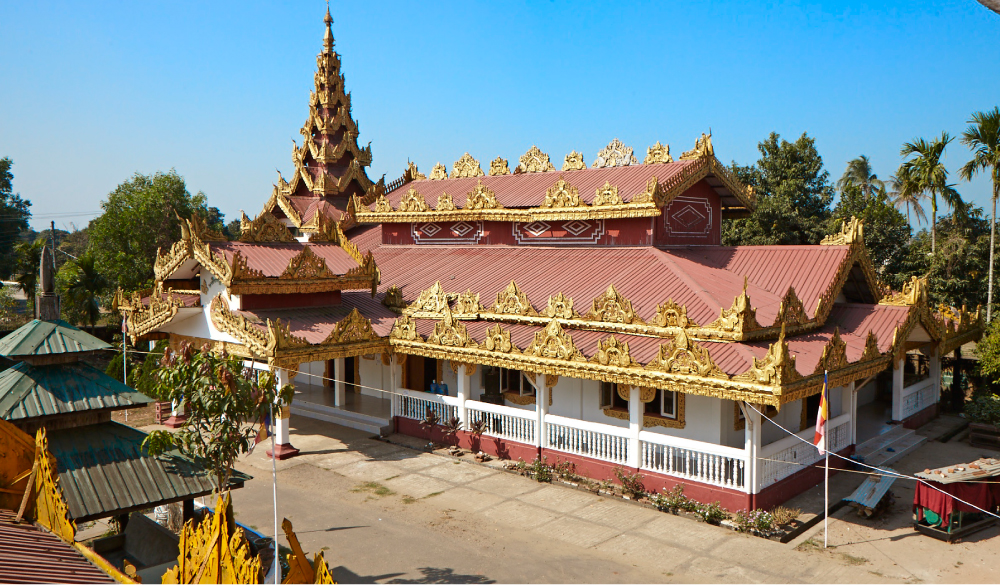 The monks of the monastery and the government had already promoted the operation weeks ago with posters, so that information about the relief efforts of the German medical team could reach people in the most remote regions of the country.

When we arrived at the monastery, a great amount of needy people were already waiting for us. Despite their suffering, however, these people were friendly and many of them were wearing their most beautiful clothes. The children were particularly “spruced up”. Looking at these faces was enough to make us forget our own hunger and the almost unbearable heat which prevails here, even during the night.

There were around 70 patients in the group of people who were waiting there for the medical team. Some of them had travelled for several days to get there, in the hope of receiving help. 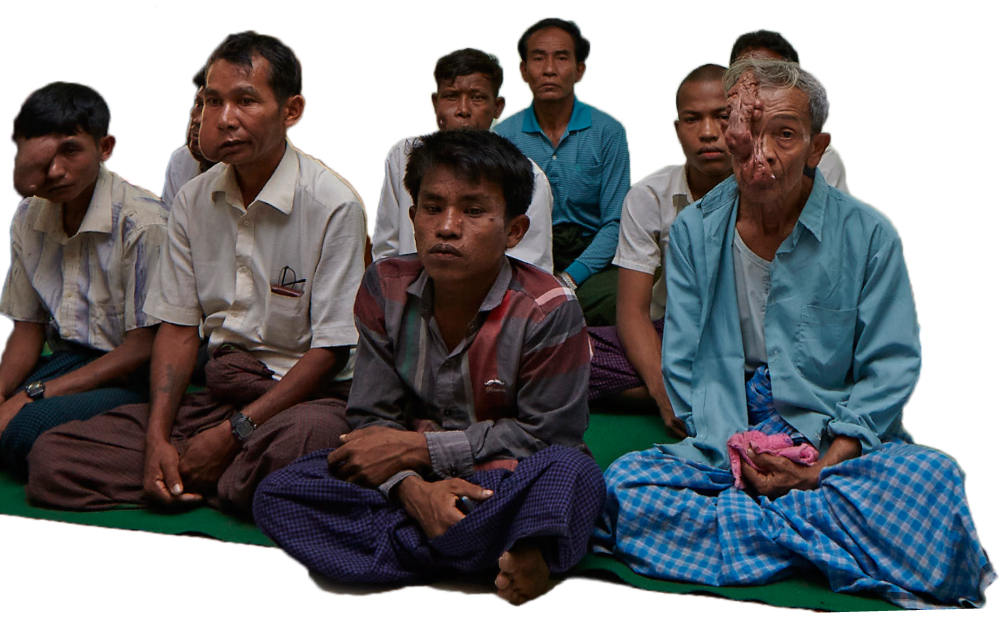 It simply makes sense to help those people … always a pleasure!

Already on the first evening, more than 40 patients were admitted and arrangments were made for operations which would take place during the next few days. Unfortunately, patients had to be rejected if the necessary operations were not possible for our medical team under local conditions, or if the follow-up care extended over a longer period of time which the relief effort would not be able to cover. Of course, patients also had to be rejected if their complaints did not fall within the specialist areas of our medical team.

What we saw from these patients is unimaginable: burns, ulcers, open cleft palates and lips, clubfoot and severe disfigurement. We will never forget how hopefully and gratefully these many seriously ill people, who had just completed an arduous journey, looked back at us. They were incredibly brave and patient as they waited to be taken from the queue and benefit from the aid given by the medical team. Each patient received a careful examination, the diagnosis was given and then the type of surgery was assigned. 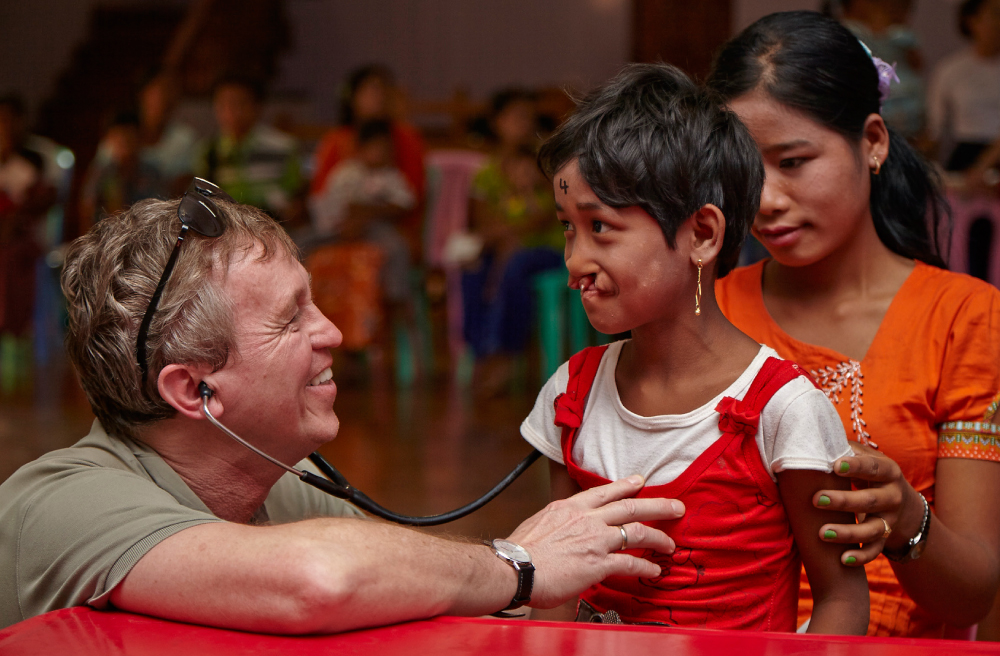 The treatment of a girl who needed laboratory tests costing €5 would not have been able to take place, as her family could not afford to pay this amount. Thanks to donations, such problems can be resolved quickly. It is a devastating experience for us to see the effect that such a small sum – from our point of view – can have, or what it can prevent. 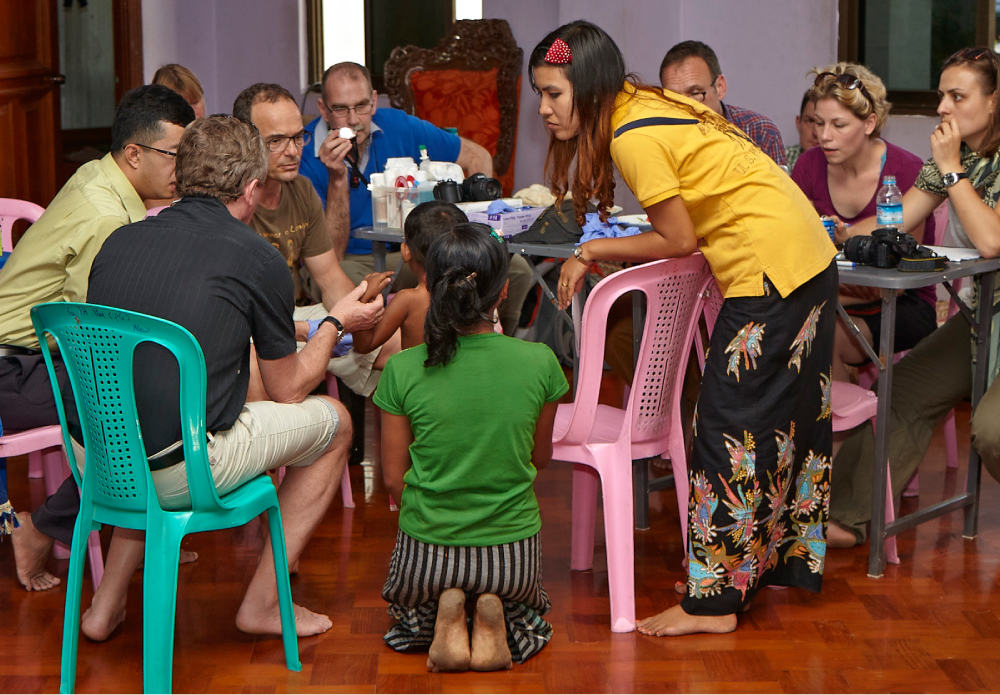 Thus a long day slowly drew to a close. The many impressions from this day kept us awake for a long time and we were more than excited about the days ahead. Our hotel was very primitive, but we had everything there which we needed. And the ubiquitous friendliness of the people there meant that fact was very easily forgotten. 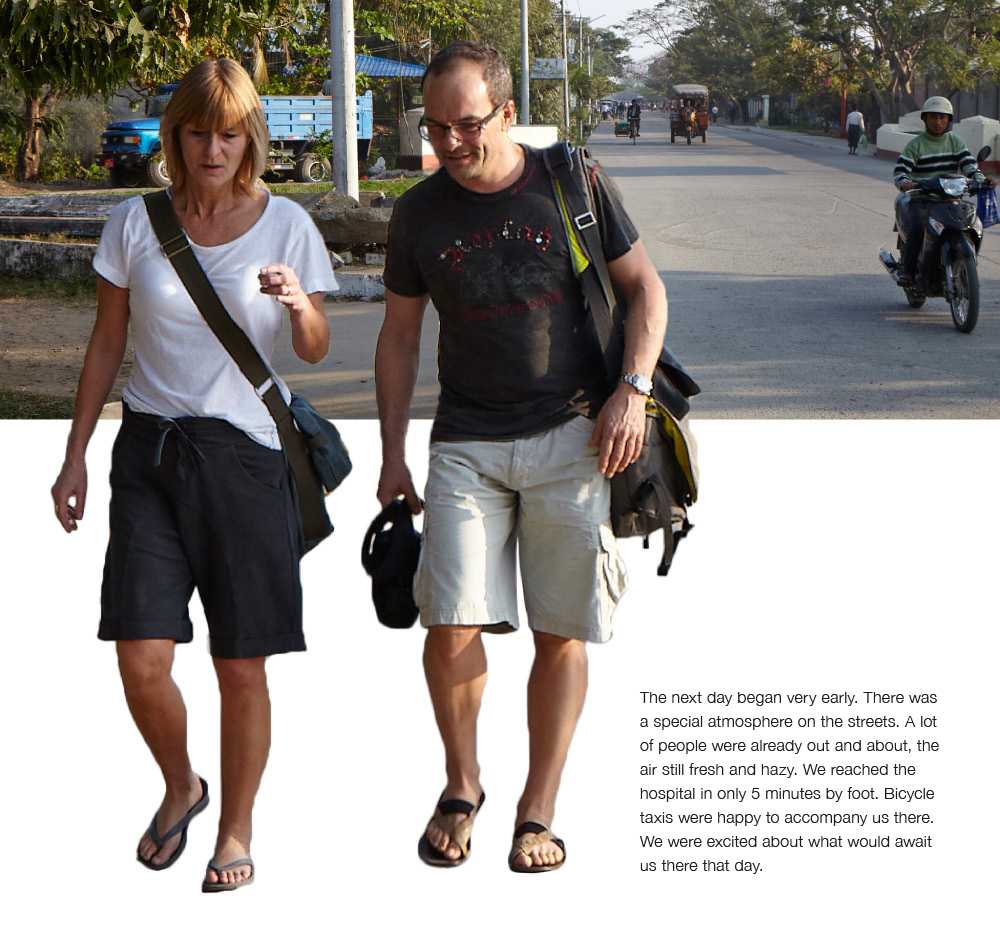 … waiting for their turn. We recognized many patients from the previous day, who were already prepared for their surgery. What moved us most were the many children, who were often waiting for their treatment without their mother or any other relatives. They were very brave. No whining or screaming could be heard. The little ones only had the stuffed animals and toys they had brought to help them while waiting. Never before had we seen children waiting alone so bravely for something which they did not understand – without knowing what would happen to them. 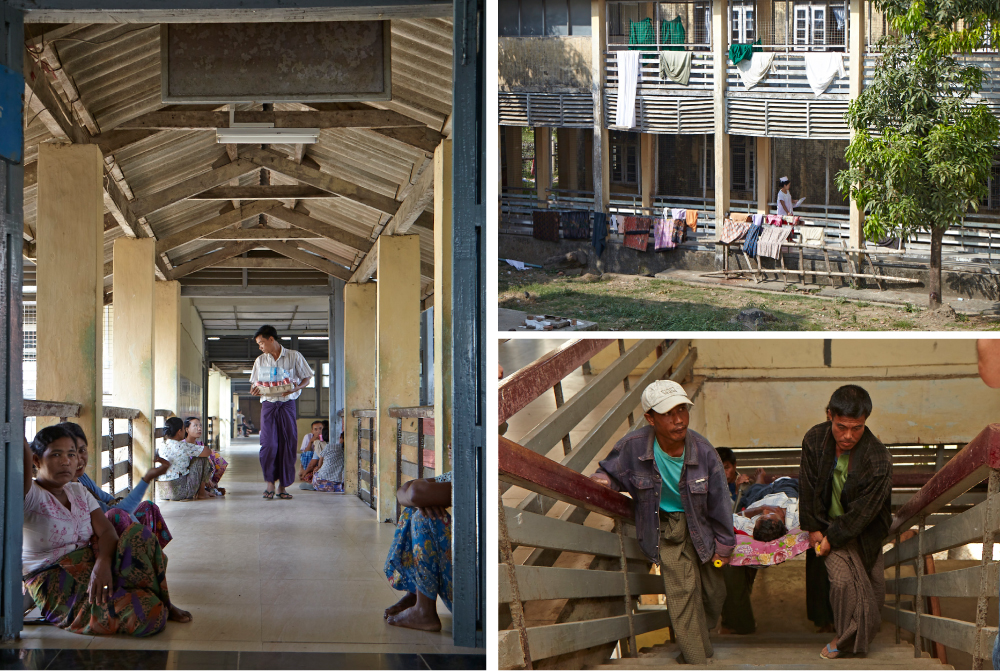 A 14-hour day began for the medical team. Up to 15 operations were performed per day on three operating tables.Some of them took more than 5 hours – and under the most primitive conditions. What the team was able to achieve there is overwhelming and admirable. It was a very moving experience for us to be able to witness it all firsthand, especially the difficult operations. 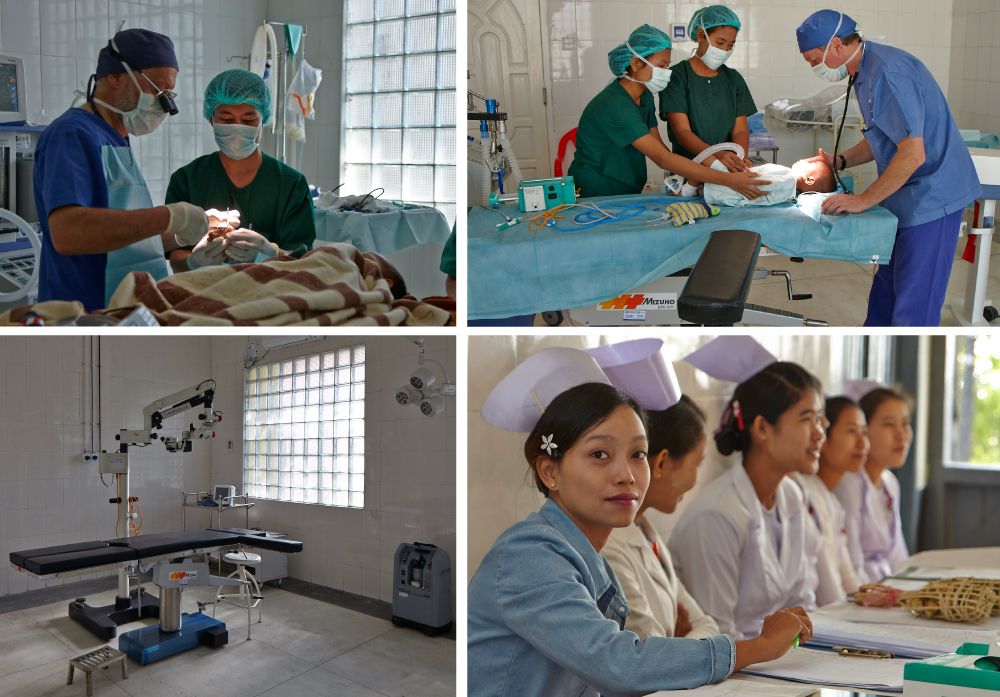 Before the operations began the next day, the rounds took place for the patients who had been operated the day before and their dressings were changed. With astonishment, we were able to observe how long some of the healing process takes. It was unbelievable that some patients had received surgery only a few hours before. Support and care from family and those close to the patient certainly helps most of all. In this country, it is normal that families provide care for their loved ones while they are in hospital. Often an accompanying person sleeps under or in the patient’s bed and provides those affected with food and drink.

The boy with the bandage on his foot has 6 toes on one foot and 7 on the other. His fingers on both hands have grown together. He lives a full 40 hours away from the hospital and will be accompanied by his father. The mother is pregnant and stayed at home – along with 4 other siblings. 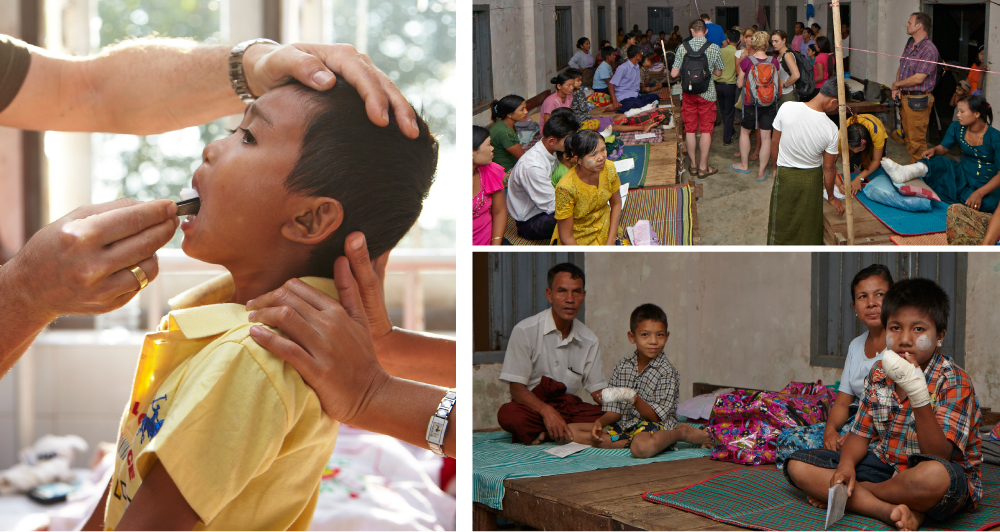 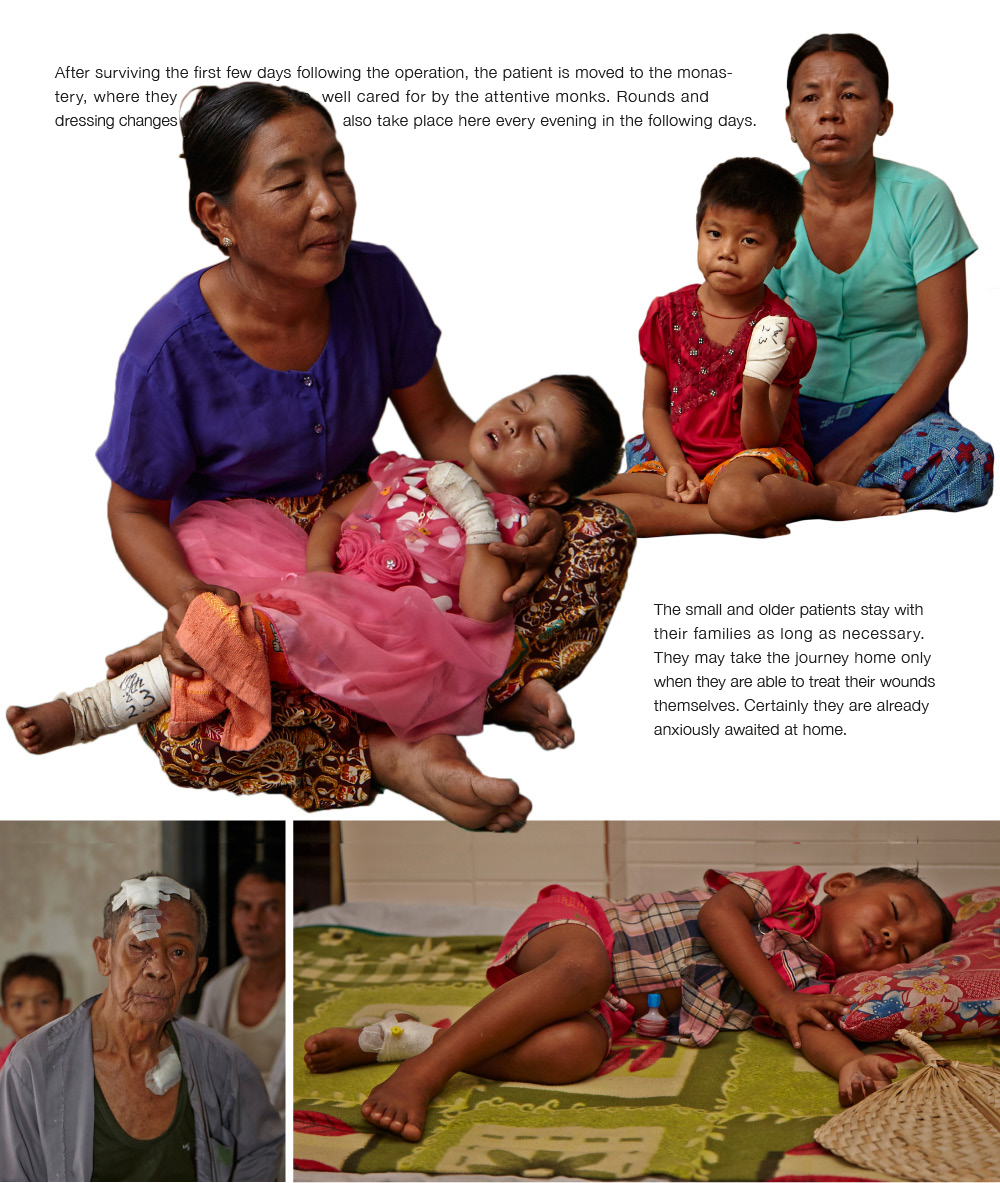 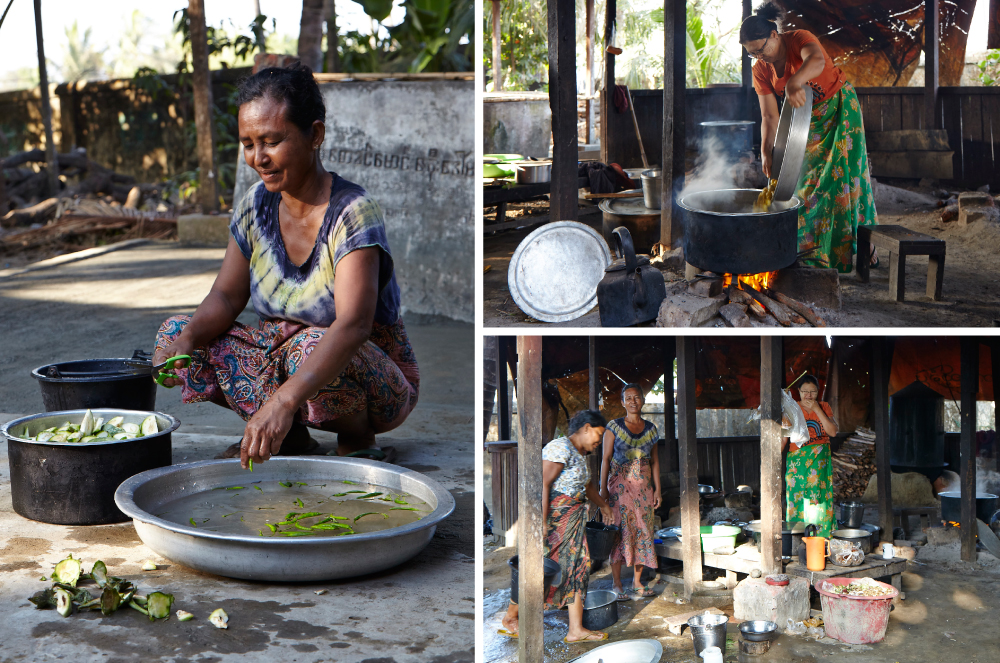 Besides the many new patients who are treated here, we were also interested in those who underwent surgery in 2014 with the team of Dr. Caius Radu. We wanted to know how they have been feeling since then and how their lives have changed following the operation. Unfortunately however, it is very difficult to trace addresses in this country. Street names and house numbers are not the general rule. Many patients live so far away that the journey takes several days and they only submit a transitional address.

But we were lucky and we were able to locate and meet at least some of the patients. We would like to report on a very special boy: 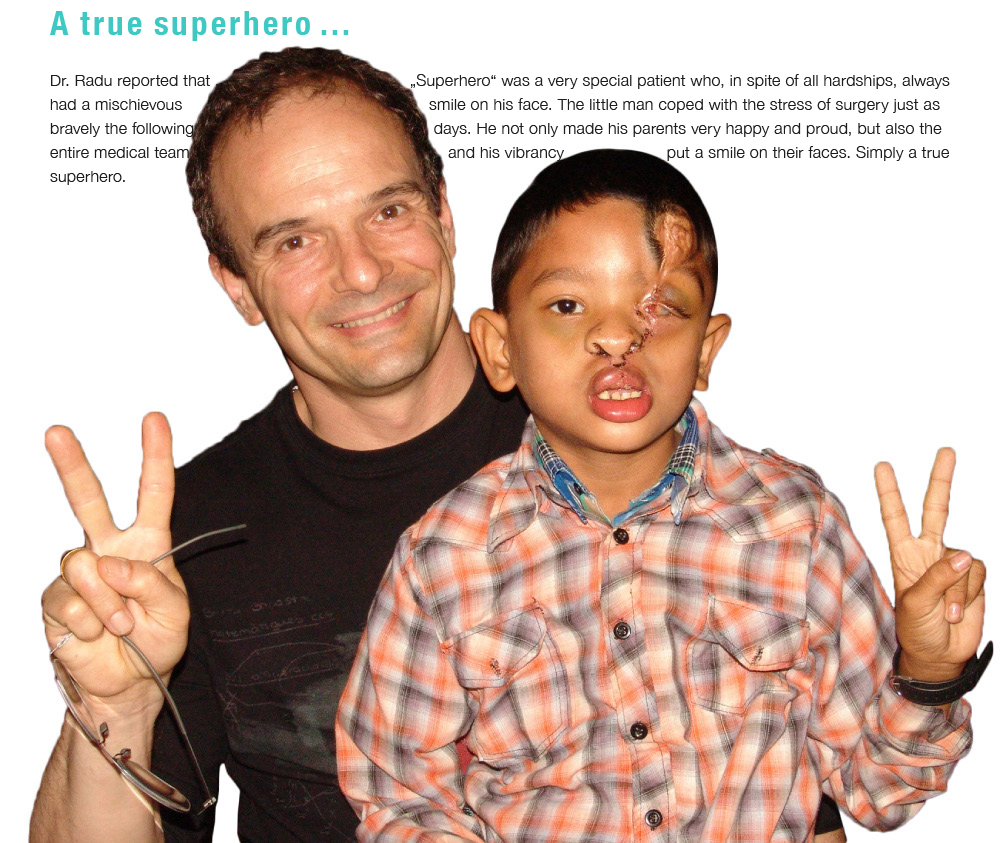 San Oo also came to the monastery in 2015, because he was aware that yet another operation would be necessary. Unfortunately, his forehead could not be closed up due to the primitive local conditions. He would have to visit a European hospital for this operation. But his palate could be closed and the corner of his eye could be corrected.

For this surgery, his parents again took the arduous journey, traveling for 6 hours by boat and 4 hours by bus. San Oo’s life has already completely changed this year. He is now able to go to school with the other children and play with his friends (except for using heads when playing football). And girls are already looking at him, his mother reported proudly.

It is clear to see the relief in the parents, that their son could be so happy and joyful. A situation which they had no longer dared to dream would happen. Today San Oo has a little sister who is 6 months old. A gift that would not have been possible a year ago, because the small, brave boy needed all the attention and care of the family.

At the end of our 14-day stay, we were able to look back on 114 operations on 99 patients. We were able to help 45 female and 54 male patients aged from 9 months to 76 years old. Help that was urgently needed. This was made possible by donations, which are used as carefully and fully as in a few comparable meaningful projects. We personally are deeply impressed by the work of the medical team that has been done here in Myanmar, and is being done here. And we are proud and happy to have been a part of this team. During the 14 days we were able to collect many overwhelming impressions which we will certainly never forget. 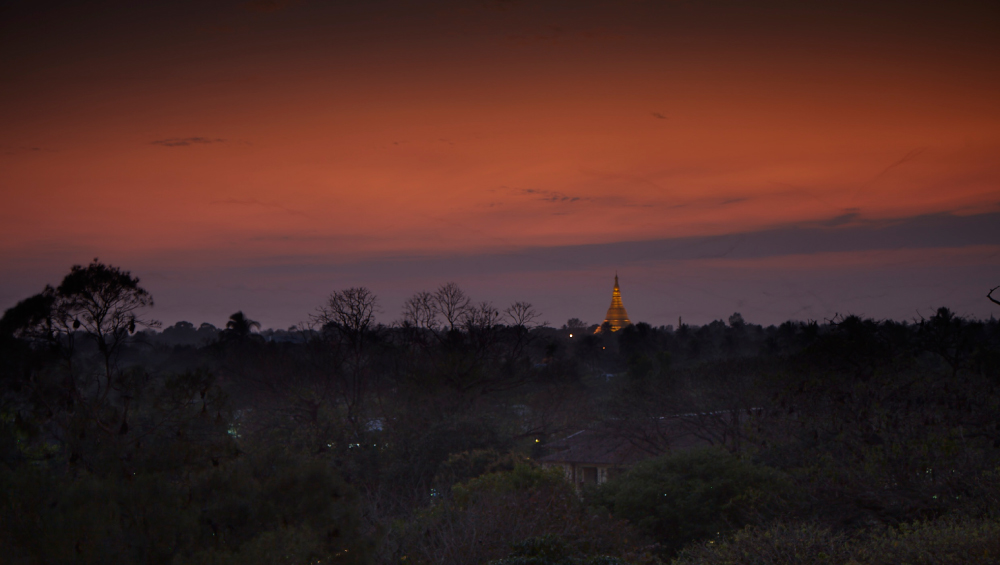 Saving a human life ist worth more than build a seven floors high Pagoda.   From China